Now that we’re all settled into 2021 and Uncle Cyril had us under curfew for another month, what better than to look to the heavens and at least know what’s going on up there.

Facing north:
With Jupiter and Saturn now hiding in the sun’s glare, Mars is the only planet visible to the naked eye in the evening. ( unless you pick out magnitude 6 Uranus!) Its moved quite far west and is still located in the constellation of Pisces.
The Pleiades ( in Taurus) now shine due north. Use this opportunity to see the sisters at a good elevation before they move too far west.  They make a good photographic subject, even a single exposure ( try about 100mm lens focal length, ISO 800,  f11, and a 2 -3 second exposure,  obviously on a tripod. Get your focus right on a bright star such as Sirius)

The bright star Capella  makes an earlier appearance just  above the Swartberg and  edges west over the course of the evening. Orion is now northeast overhead.  If you’re looking north east after 10 pm you’ll see the twins of Gemini ( Castor and Pollux) rise northeast. ( more about them next month).

Turning east, Sirius is now high overhead, with Procyon midway between it and the horizon. Stay up late and you’ll see Regulus rise on the eastern horizon. It’s a quadruple star system located about 80 light years from earth. 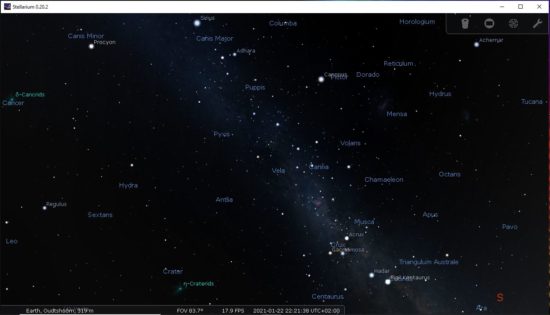 The most spectacular skies are now in the  south.  Starting on the southern horizon, the southern cross  and the pointers are both visible again after their short spring absence. Follow the Milky Way from the Cross up through Carina. Look for both the Eta Carina nebula and the “southern Pleiades” open cluster( see this weeks starview image looking south). Above Carina you’ll see the False cross (Vela)
and lastly, between Vela and Sirius, and to the left of Canopus,  you’ll  see the constellation Puppis. ( the poop deck of the ship Vela). On old sailing ships the poop deck is the highest deck, normally at the back. Theres no definitive answer that it also served as the “poop” deck. At Darkskyes the various components of our observatory are named after constellations, and we’ve got a path leading away from the general area to “Puppis”, located behind a lone tree.
With the Milky Way now occupying almost overhead centre stage from south to north, the western sky is very sparse.  No real change from last week, except that the brightest Fomalhaut, is lower to the horizon, along with the pair Tiaki and Alnair some way below it,  and Diphda above right. Achernar is overhead.

The waxing 1st quarter moon is visible  from 14  Jan in the west. On Saturday 16th   and Sunday 17th you should be able to see earthshine on the unilluminated moon. The night sky becomes significantly brighter from 21 January, with full moon on 28 Jan @ 21hoo.  Put your deep sky viewing aside for the last week of January, and focus on the coming lunar binocular challenge.( details to follow). If you want to get good moon photographs, 25/26 January will be best to capture the slight shadows on craters on the partially illuminated side.