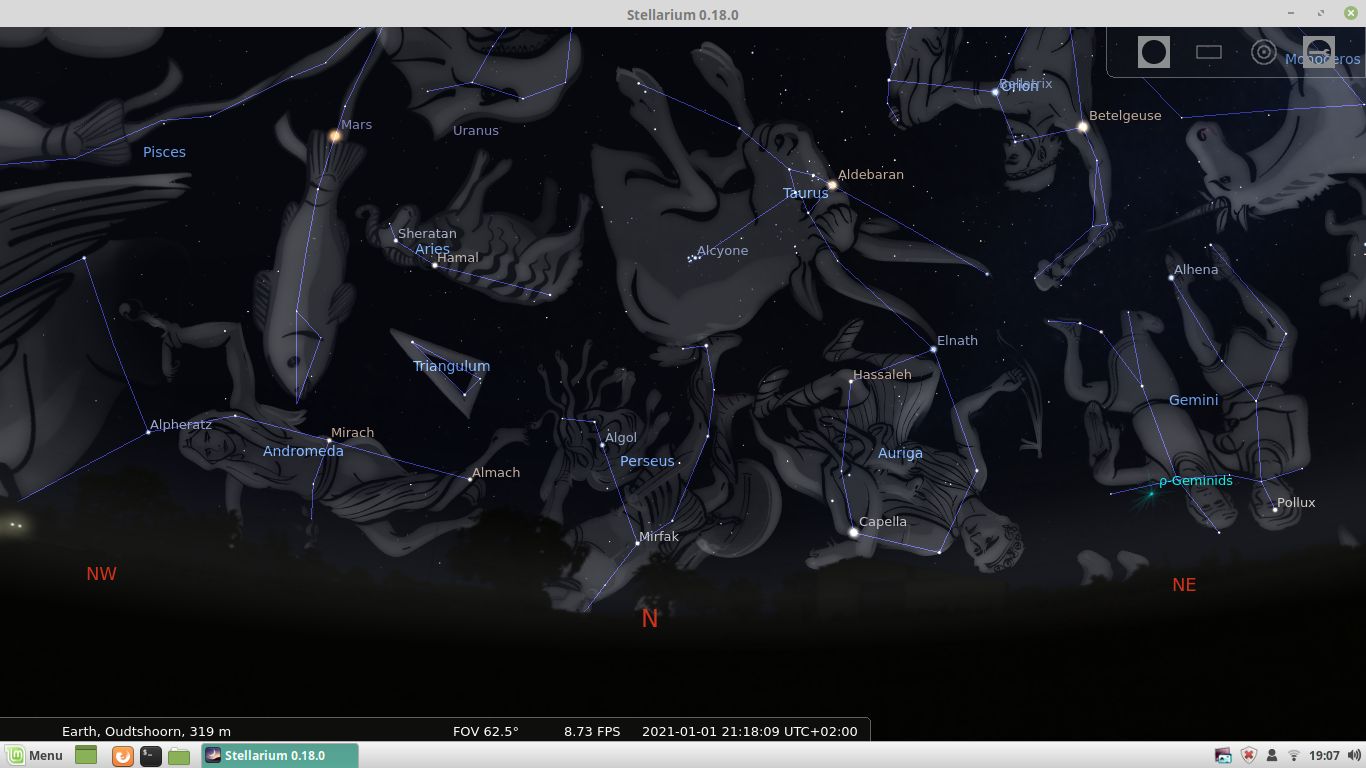 So we bid farewell to Jupiter and Saturn, who have kept us occupied with a stunning display.
Darkskyes planetary pickings will be slim until around July/August when Saturn and Jupiter approach opposition and are very visible at a reasonable hour, again. Until then we will have to be happy with Mercury, that spends it’s time in the glow of the sun, and Venus, that although bright is a telescope disappointment. Mars although still bright, continues to move further away. If one is really keen, the tiny blue dot of Uranus (some 3 billion km away) is visible to the right of Mars in good binoculars or a telescope. It’s a good astronomical tick, similar in birding terms to ticking a Herero chat – not very impressive, but nonetheless very satisfying.

Now for the starcast.
Looking north, the skies have become quite interesting. In the northwest, orange Mars is unmistakable. A tad below and right is the triangle of Aries, with the two bright stars, Hamal and Sheraton.  Moving right and almost due north are the Pleiades. Move directly down to the northern horizon to see Algol, an interesting eclipsing binary star that noticeably fades and brightens with precise regularity every 3 days (actually 2 days, 20 hours and 49 minutes) This is because the orbital plane of the stars aligns directly with earth, and they are quite close at around 90 light years.

Moving right, you may just see Capella prep over the Swartberg around 22h.30.

Orion is now high in the northeast, with the head of Taurus to its left.

Look east to see Sirius (Canis Maior) high up, and Procyon (Canis minor) lower down. Just to the right of Sirius is the bright pair of Adhara and Wezen.

South sees the milky way rise diagonally south in the direction of Sirius. The southern cross has returned from it’s short absence behind the Kammanasie mountains, and you will see the 2 pointers if you’re out late, or looking from an elevated position. High in the south west is Achernar, a variable star. But you  have to wait around 600 days to see any marked changes in brightness.

Turning west, Fomalhaut is the only bright star of note, quite low to the horizon. If you look towards Fomalhaut at exactly 21h41 you should see a Crew Dragon space craft pass in front of the star.

2. If you want to have late alchol free sundowner, then Thursday 7 January is the day. Sunset for De Rust is at 19.43.  “Wait!” I hear you say. “Surely it should coincide with the Summer solstice?”
No, the solstice is when the sun shines directly on the meridian.
3. The best deep sky views (dark skies) for the next two weeks will be from 7 January to 15 January.

COVID requires you to be safely tucked up in your home’s by 21hoo, so we won’t be offering any astronomy nights until further notice. I’ll use the time to brush up on my astrophotography. Stay safe.