Skip to content
Posted on 6th Aug 2021Posted in Blog 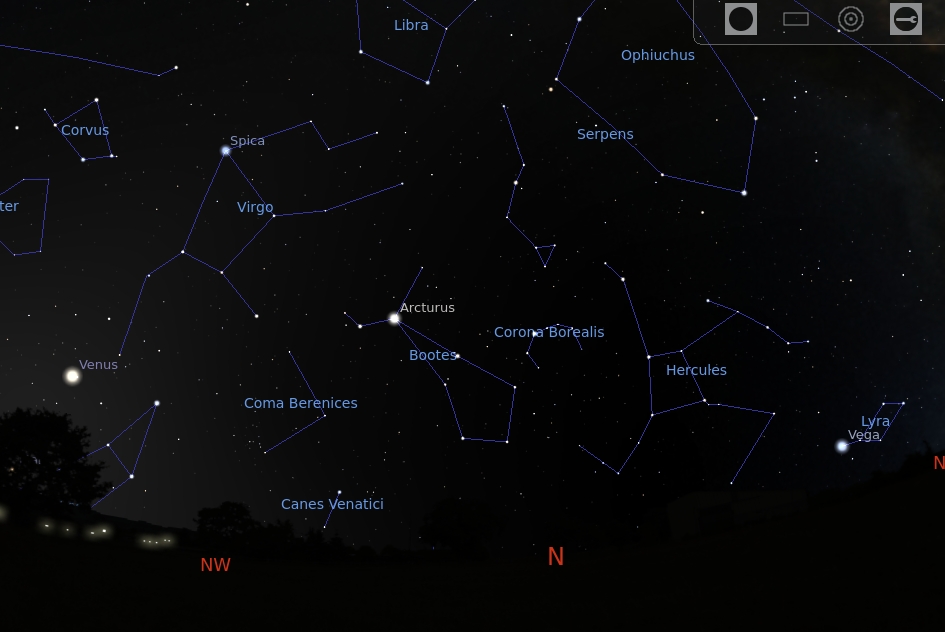 Its starcast time. The last month has given us some good dark nights. Unfortunately we’re now heading back towards the Spring equinox, with the nights getting shorter. Darkskyes sessions starting at 18.30 will soon be a thing of the past. But this is a great month for planetary viewing and on 22 August all five of the “visible” planets will be visible to the naked eye half an hour after sunset.

Whats up out there this month…

Looking to where the sun set in the west, Venus, shining at a magnificent magnitude – 3.9 is clearly the brightest object in the sky. In fact, if you know where to look you can see it during the day through binoculars.

Above Venus, the bright bluish double star Spica marks the otherwise rather faint constellation of Virgo. While there may not be many stars in Virgo, it a great place to see galaxies, as it host the famous Virgo galaxy cluster. You need a telescope of at least 200mm to see the brightest of these.

Due North, Hercules is visible low on the horizon, with the brightish Vega making its appearance to the right, and also low on the north eastern horizon.

Turning to face east, you should see the star Altair prominent at North east, with a super bright Jupiter (Mag -2.8) rising at due east. Saturn, slightly orange, is located a little above Jupiter, bang in the middle of Capricorn. Because Saturn takes half a lifetime to orbit the sun, it will be situated in Capricorn area of the sky for the next year of so, while Jupiter widens its gap to Saturn as it orbits every 12 years.

If you trace a line from Jupiter through Saturn, that line leads you to Scorpio which is now direcly overhead. On the way up, look for the easy-to-see Corona Australis, a curved tail of stars, just to the right of Sagitarius. If you’re at the Grumpy Goat and Corona Australis is overhead, you should be at home under curfew. See how the stars keep coming to our aid.

Facing south west, you should see the Milky Way diving into the western horizon. Follow it up via the False Cross of Vela and Carina, through the bright clusters and star formation in Carina to the Southern Cross. and Pointers.

This month we have new moon on 08 July and full moon on 22 July Its also a Blue Moon (the third of four full moons occurring in a season – normally only three full moons per season) That Blue moon will unfortunately spoil the view of Jupiter, which is at opposition on the same day (Earth positioned directly between the Sun and Jupiter, with Jupiter at its brightest).

If you really want to amaze your friends, you can tell them that midwinter on Mars southern hemisphere occurs on 25 July, with polar temperatures getting down to -153 degrees C.

Now that the great planets are out, and the Milky Way core is perfectly positioned, Darkskyes has plenty on the menu………………..so book a tour. Its cheaper than taking the family to a restaurant. And remember  – De Rusters get a discount, kids get a discount, and returning guests get a discount.

Cheers till next month