Skip to content
Posted on 2nd Jul 2021Posted in Blog 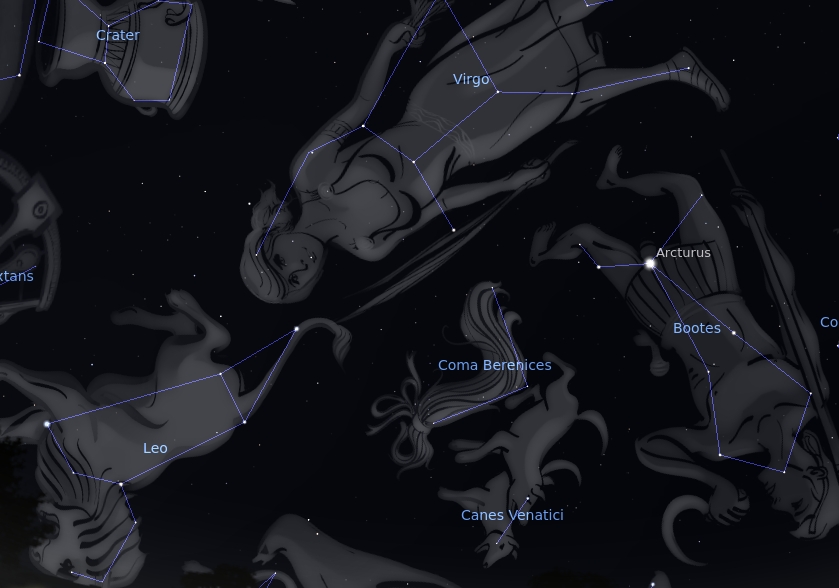 Its the time of the month when a starcast is due. Given that you’re all curled up at home by 21h00, what better way to use your time on a cool winters night, than to prepare some gluwein, settle into your garden recliner with a warm foot-blanket and a pair of binoculars, and check out the stars.

If you went out just after sunset, and looked to the west, you would have seen Venus, shining as the brightest object in the sky. It sets at about 19h00. A faint Mars can be seen just above Venus.

Looking north, the bright orange star Arcturis, located approximately midway between the horizon and overhead, is a good marker star. Its a red giant, in the constellation Bootes, and although its mass is about twice that of our sun, it releases over 200 x the heat of our sun, meaning it is fast approaching the end of its life.

Now look 45 degrees left and above to the next bright star, which is Spica, which marks the constellation Virgo. Its a variable double star with its two stars so close to each other that both are egg-shaped due to opposing gravity.

Looking further left (NW) close to the horizon (and if the Swartberg isn’t obscuring your view, you should see the setting star Regulus (in Leo). Arcturus, Spica and Regulus make up an asterism called the Autumn triangle.

The constellation Scorpio dominates your view. If you cant see it, look for another orange star (Antares) This forms the head of the scorpion while the kink of the tail (or sting) is easy to make out to the right of Antares. Below Scorpio, closer to the horizon the constellation Sagittarius is in view after 20h00, and if you look out later at night (around 23h00), Saturn reappears, located now in Capricorn, for the first time since the famous conjunction with Jupiter, in December last year. Since it orbits the sun every 30 or so years, it will remain in this location for the next few months.

Facing south, the skies near the horizon are fairly devoid of stars, but overhead The southern cross and pointers are most prominent. Follow the Milky way from Scorpio, where you should, with the aid of even low powered binoculars, see numerous star clusters, all the way to to the southern cross. This is a great area for deep sky objects. Especially impressive is the area just “below” the tail of Scorpio, where Messier 7 or Ptolemy’s Cluster is clearly visible. Its about 1000 light years from here, and around 25 light years across. Unlike most things in the galaxy, which are moving away from us, this cluster is approaching the solar system at about 50000 km an hour. Not to worry though. At that snail’s pace it will take many millions of years until the meeting occurs

Turning to face west, the bright star Canopus is near to the horizon, and if you looked before about 19h00 you should have seen the last views of Sirius, until it rises again in Summer (unless you’re an early bird and look east in the wee hours of the morning).

For the Moon watchers, new moon occurs on July 10, and full moon on 24 July. The super-moons are now a thing of the past as full moon move out of sync with earth lunar perigee. The full moon will be fractionally smaller each month until early next year.

If you want to see an exceptionally bright (mag -3.1) International Space Station overflight, Thursday 8 July @ 18h32 wont disappoint. Look to the south west (approx Dysellsdorp). It will move from west to east and be visible for 6 minutes.

Until Next month. Stay Safe.