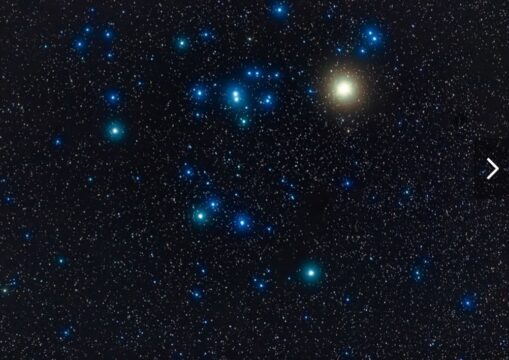 For the last few weeks we’ve been looking at the north west, first with the Pleiades, then Orion. Let’s fill the gap between the two and look at the Hyades star cluster in Taurus. This “V” shaped cluster forms the head of Taurus the bull.

Look up to find Orion. ( look at the last description if you can’t find it). Now look just closer to the northern horizon. The unmistakable “v” which includes a clearly orange coloured star mark’s the cluster.
This is a good example of an open cluster. This group of stars is quite close to us, at about 150 light years. Its diameter (if you project a circle over it) is about 20 light years.

While almost all of the stars in the group are related, the brightest, Aldebaran is actually unrelated to the cluster, lying much closer to us at 65 light years. It’s a red giant star with a diameter of about 60 million km ( around 45 x that of our sun). It weighs just a little more than our sun, but its expanding size as it nears the end of its life in a supernova, makes it shine 500 more brightly than the sun.

From a historical perspective, references going back over 2500 years make Taurus one of the oldest named constellations, probably because at that time it was close to the sun’s position at equinox, when day and night are about equal in length. That’s about 2 weeks from now on 20 March.