We’re almost at the southern autumn equinox. Our night sky at around 9.00 pm has the Milky way now bisecting the sky from north to south, with many of the deep sky delights directly overheard.

The great planets are all near to the sun, and you have to get up at about 4 am to get a glimpse of them. If you do, On March 5, Jupiter and Mercury are almost in conjunction with Saturn hanging about at the outskirts. March 12, an hour or teo before sunrise will provide a nice spectacle with the three aforementioned planets, and a thin crescent moon, all in the same picture. This could make for an interesting photographic opportunity.

Back to 9.00 pm, looking north, the sky is filled with a number of features, most of which Ive dealt with before, but as the picture has tilted a lot, here goes.

In the northwest you can still glimpse the ever dimming Mars close to the Plieades. The ‘V’ of Taurus and the unmistakeable red giant, Aldebaran are now above this, with the constellation of Orion even higher up.

Low on the horizon and almost due north is Capella, and higher on a due north plane, the twins Castor and Pollux, in Gemini are clear to see. The lower (Castor) star is interesting as it is one of only a few sextuple stars – six stars arranged as three binary pairs. This creates a challenging system of intertwined orbits with some of the orbital periods as long as 14000 years, and some very short. Alpha Geminorium Ca and its companion Alpha Geminorium Cb, whizz around each other in under a day. Unfortunately Darkskyes doesn’t have the equipment required for you to see this confusion. We can however “split” Castor ( a mere 52 light years , or 450 000 000 000 000 km away) into two and see the two larger systems as a binary star. 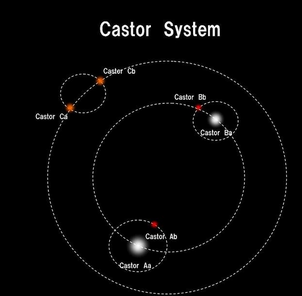 Highest in your northern view are the two very bright stars Sirius and Procyon, in Canis Major and Canis Minor respectively.

Turning to the east the sickle of Leo with Regulus at its hilt is visible. You may ask what has happened to Cancer. Its still there, but its faint stars located between Gemini and Leo do not make for any major stellar highlight.

Further to the right, around south east the rectangle of Corvus the Crow is quite prominent, with the bright star Spica (in Virgo) appearing on the eastern horizon around 10.00 pm.

Looking south is where Darkskyes’ major source of tasty treats can be found.

The southern Cross and the pointers (Hadar and Alpha Centaurus) have rotated high into the southern sky. At Darkskyes we spend some time in this area, splitting the binary star Alpha Centaurus, and visiting the Jewelbox cluster in the Cross.

To the west (right) of the pointers is the southern triangle ( Triangulum australe) and a little further right the constellation Octans which contains the south celestial pole around which all this rotates.

From the Cross you can follow the Milky way via Carina, Pupis, Canis Major all the way back to Orion.

Facing west, Achernar, fairly low marks the end of the ancient Eridanus river. You should still b able to see the smudges of the two Magellanic clouds (our closest galactic neighbours) and their marking star, the very bright Canopus, just above the tiny triangle of the Painter (Pictor).

On Monday 8 March I will be trying to view Vesta, an asteroid classed as a planetoid, as it makes its closest pass to earth at around 200 000 000 km from Earth. Since its only around 500 km in diameter, its the equivalent of seeing a 5c coin at 1km, and therefore a pretty good astro tick.